Over the Easter Vacation, 1997, the Pembroke College Winnie the Pooh Society made a pilgramage to the home of A.A. Milne and Pooh in East Sussex. Below follows a diary of what occurred....

For more information about the area, this is a good site to visit.

(at the time of the pilgrimage)
Jon- Secretary and Pooh
Vicky- Treasurer and Eeyore
Ben- President, Piglet, and James.

The Hunt for a Picnic Spot

It being well past eleven, the company were of the General Opinion that it was Time For A Little Something. So, after regretfully leaving the car next to an Ice Cream Van (we didn't want to spoil our Picnic), we went off in search of adventure. First of all we found Galleons Lap, and we couldn't work out whether there were 63 or 64 trees, even when we tied a bit of string round one of them, but Pooh did find a stick which he felt would be useful for Poohsticks later. 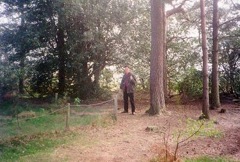 Near that, we saw a memorial to AA Milne and all that he had done for the forest... Pooh and Eeyore stood solemnly by it, as it was an enchanted place, and we didn't want to spoil the magic.... 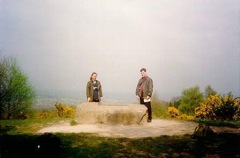 Here is a close up of the words on the memorial: 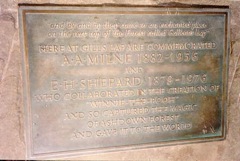 The picnic, consisting of lots of honey snadwiches and other nutritious food which met Pooh's approval, was enjoyed, and then Pooh noticed a post not far from the Picnic spot. Pooh rushed over and discovered it was the North Pole. 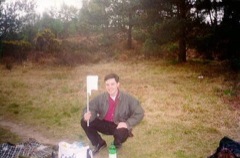 Eeyore pointed out that it was in fact the pole that she took with from her car, but Pooh was having none of it. Brandishing his stick, he did his stoutness exercises in readiness for Poohsticks. But Eeyore wasn't watching- for she had finally found Small, the Beetle, and soon pootled him (just don't ask!). 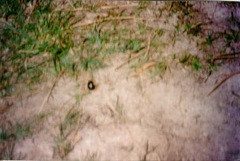 After a short drive to the bridge, and a longer walk, we were all psyched up and ready to play...

Time forgets who won, but I'm certain it wasn't me (Ben). So, I think I'll leave this report, with Pooh and Eeyore gazing into the waters under the bridge that Christopher Robin and his friends played on all those years before. 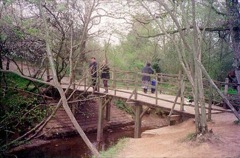 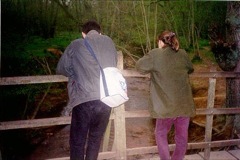