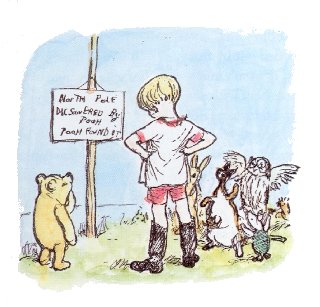 Whatnots and Etceteras, Society Members (Past, Present and Future), Supporters, Spectators and Detractors (if there be any) pray silence for an

News From The Hundred Acre Wood

This has been a year of rejoicing for the Society, with several long termprojects reaching fruition.


VICTORY After 6 years at war, intelligence was received at the start of the Michaelmas term that the heretical `Sheila and Her Dog' Society had bowed to the inevitable and folded, thus implicitly admitting the superiority of Pooh. Whilst this of course deprives us of enemies from whose skulls we might drink toasts, warriors of former years will no doubt rejoice to hear that victory is to the supporters of Milne at last.


COUNCIL SEES REASON Almost a decade after the Society first wrote to Cambridgeshire County Council suggesting that the Silver Street Bridge be closed to traffic to facilitate the Society's Pooh-sticks activities, a move has finally been made towards meeting our request: as of this summer, Silver Street will be closed to cars by the installation of a rising bollard. This follows a similar closure of Magdalene Bridge in 1997 (Magdalene Bridge was the Society's second choice at the time of the writing of the original letter).

The original letter to the council:
http://www.poohsoc.org.uk/Archive/Correspondence/council.html


THE NINTH AND A HALFTH ANNIVERSARY At the beginning of February the Society celebrated its 9 1/2 th Birthday, with Celberatory Elevenses, Dinner-with-Speeches,attended by Members, Honorary Members, Former Members and Guests (and potential Future Members); a Pink Iced Cake and a Pooh-sticks match.

The Society was taken to task by the Lady Foundress for the omission of The Constitution's One Split Infinitive from recent versions of that document and steps were taken at the AGM to restore it to its rightful place, together with the Jon Jarrett Memorial Footnote to remind future re-draughters that its presence is important.

The seventh ammendment of the constitution:
http://www.poohsoc.org.uk/Archive/Constitution/v7.html


T-SHIRTS After much organdisation we are now about to place an order for Society T-Shirts, priced at £10 (cheques made payable to the "Pembroke College Winnie-The-Pooh Society" please), by the end of July. Orders (please state size) should be submitted to:

If you would like to receive your T-Shirt by post please include an extra £1.50 for postage/ packing.

The design (to be screen printed onto sky-blue T-Shirts:http://www.poohsoc.org.uk/t-shirt.jpg


OTHER ACTIVITIES In between Jollifications, the Society has continued as is its wont, with Elevenses and General Meetings, Poohsticks Matches and Bridge Crawl as well as other such important things a Pancake. Innovations for this year include a Biscuit League and a Formal Ready Steady Cook.


NEW YEAR'S HONOURS This year's additions to the list of Honorary Members are Helen Lovatt (nee Masters), the Lady Foundress, and Dr Len Fisher, author of `How to Dunk a Doughnut'.

MAILING LISTS Any members leaving this year (or former members who have already done so) who would like to keep in touch with the society are welcome to subscribe to our alumni mailing list by emailing pem-pooh-alumni-request@lists.cam.ac.uk. You will be kept informed of major society events (who knows one day we might be 18 3/4) as well as kept upto date with what the society is up to.

We also have an announcements mailing list for weekly meeting times and a discussions mailing list to which anyone is welcome to send. To subscribe/unsubscribe please send an email to the revelent address (below):


AND FINALLY... As recorded in the minutes of the society

OFFICERS OF THE SOCIETY